Make your picks each week.
nail all 6 and win!

*Gift Card prize pools paid out with Amazon/Fortnite Gift Cards. Prize Pools are split evenly among all qualifying winners. MKF dollar prizes are not split, the full amount is awarded to each winner.

this contest has ended.

Prize pools are split among all qualifying winners. Gift Card Prizes will be awarded as amazon gift cards, emailed to winners within 2 - 4 weeks of completion of the Cash Cups FNCS Challenge. You must be a registered MKF user to claim MKF dollar prizes. MKF dollars will be awarded to winners' MKF accounts in 3-5 business days of completion of the Cash Cups FNCS Challenge. If you do not have an MKF account at the time of winning, email support@monkeyknifefight.com to claim your prize. MKF Dollars are usable in place of cash on Monkey Knife Fight, once they are played, they are treated like cash. MKF Dollars have no cash value. MKF Dollars are not eligible for cashout. MKF Dollars are not transferable. MKF Dollars may be reclaimed if they go unused for a period of more than 3 months. MKF Dollars will be invalidated across all accounts if a user opens more than one account. MKF Dollars were previously referred to as promotional funds.

Fortnite is a 100 player online battle royale. Players jump from a “battle bus” that flies over the map (play area) and begin their search for gear (weapons/healing). Fortnite has a unique mechanic, “building” which allows players to manipulate the terrain of the map. As the game goes on, the playing area begins to shrink, forcing players into combat. Last person/team alive wins the game!

Anyone with access to a computer, mobile device or gaming console can play Fortnite online for free. Fortnite is cross platform, so players using different inputs can still play together.

Like traditional sports, esports are organized events/matches/tournaments of a specific game, in this case video games. Players can compete as individuals, or part of a team and are often rewarded with monetary prizes/trophies depending on their performance.

Cash cups:
Cash cups are single day tournaments where a winner is crowned at the event of an event.

Fortnite Champion Series(FNCS): Competitive series played out over 4-6 weeks in 2 stages. These include weekly qualifiers with multiple rounds, followed by 4 competitive heats. At the conclusion of the qualifier rounds, a Grand Final event is held in which a FNCS champion is crowned.

Tournaments are held for competitors based on their region; Europe, North America, Oceania, Asia etc.

Cash cups:
One 3 hour open (anyone can play) session where players are allowed either 10 games OR 3 hours of play (whichever happens first). At the conclusion of the event, a winner is named based on points acquired.

Players who place in the top 20 in the weekly qualifiers automatically advance to the heats. All other players in the top 1000 earn series points.

FNCS Heats:
4 heats of 50 teams. Teams are awarded spots by either:

The top 12 teams from each heat advance to the grand finals.

FNCS Grand Finals:
The 48 teams remaining at the conclusion of both the qualifiers and heats compete in one final 6 game series. The player/team with the most points at the end of the 6 games is crowned FNCS champion of their region.

Placement:
Players are awarded based on their time alive relative to the other players in the lobby. A maximum of 10 points are awarded for placement.

The breakdown for duo events is as follows: 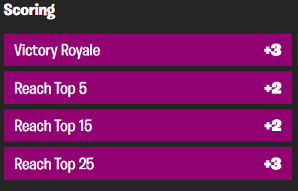 Eliminations:
Players are awarded 1(one) point per elimination. For example if a player/ eliminates 6 players they are awarded 6 points. If players are competing in a team, points are still awarded for each individual elimination, ie. eliminating a team of 2 is worth 2 points

Fortnite also has a specific category on the streaming platform Twitch where you can view individual streams from all of the top players. You can find that category here: